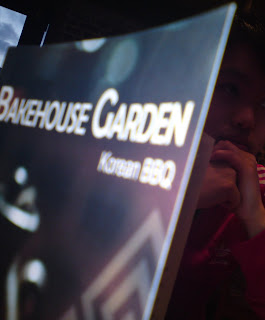 People say first impression always count and you bet it does. As soon as I had stepped into the room, a whiff of marinated bbq rushed through my nose. It was so exotic. The place was quite funky in its own unique way, especially being in the bakehouse lane it had all the olden arched walls turned into massive windows that were in par with the pathway. It is one of those places where it would perfect to go to during summer where you can barbecue away your meat while chilling with the summer breeze coming from a gigantic opened window in a peaceful laneway away from the busy CBD.

As we were guided to our tables, I noticed that approximately 90% of the remaining tables were marked reserved; talk about being popular! Not long after we ordered, the meat had came out but I guess that is expected since after all it is korean bbq. 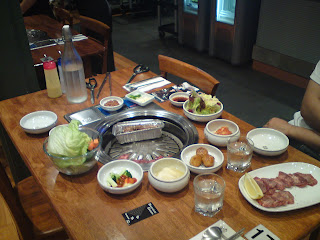 Korean BBQ - Bulgogi - Marinated Thin Slices of Beef ($15.00) and Sliced Ox Tongue ($15.00)
The bulgogi came in a disposable aluminum container which was placed on the BBQ and it was heated up in the container with the sauce bubbling away, however eventually you had to quickly barbecue it before the meat bubbled away. As creative as the idea of the disposable container was, the marination of the meat seemed to be lacking unlike Madang and the servings seemed a bit smaller than most other places (even the rice seemed a tad smaller!!). The ox-tongue however tasted very standard in a good way meaning it just tasted like every other place. 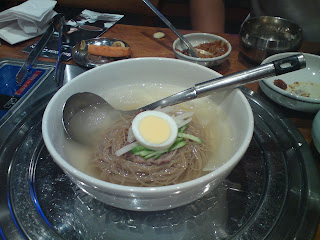 Buckwheat cold noodles served in a chilled broth - $12.00
Luckily we had ordered another dish, buckwheat cold noodles. Again, it was nice but I personally thought it wasn't that up to scratch unlike other places. It had the nice thin noodles which weren't over or under cooked but the soup itself didn't have the same sweetness as it should have been. Even though the price seemed cheaper, the serving itself seemed smaller but being in a place such as Bakehouse it is some what expected to be a bit more expensive and less value for money.

Service itself was fairly good, waiters were running around everywhere so even though you did not have the buttons it was fairly easy to catch their attention. If you haven't been, I would said say do not fear because you are not really missing out as you could probably find other places with better food and more value for money. In saying that however, I would not only support those who are willing to give it a try because it is worth trying but I would also say it is a place I would (eventually) go back again to.