Besides the word 'free', nothings beats satisfying expensive taste at only half price! Lobsters, crabs, oysters, mussels, sashimi, squid, prawns; i.e. luxurious seafood is the way to go! Four Points by Sheraton is currently doing a special of having 2 people dine for the price of 1 and unless you were allergic to seafood how could you say no. 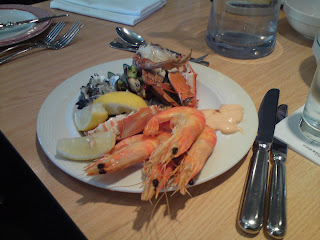 Seafood plate filled with prawns, champagne lobsters and oysters.
The seafood there was fairly reasonable. The oysters weren't the best since after all it is only a seafood buffet and not the fish markets however they were good enough, especially because it did not have the bad sea taste. The champagne lobsters were fleshy and sweet (and to an extent addictive LOL) however the crabs on the other hand were a disappointment as they were so tasteless and merely sweet.

The mussels were also tasteless but I thought it was okay only because it was covered in cucumbers, tomatoes with a dressing on top. Prawns were average but in saying that I have had worse at other buffet places. Unfortunately the sashimi was not fresh so it tasted more like a piece of flesh and nothing more. 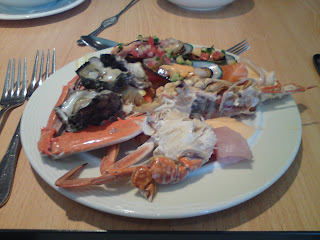 Seafood Plate filled with prawns , champagne lobsters, crab, oysters, mussels, squid salad, sashimi (Tuna and Salmon).
Besides the cold seafood bar, there was also the hot food section which had dishes such as dory and salmon fillets with an attempt of an asian touch to your typical fried rice (which wasn't too bad actually). I thought that even though it was a seafood buffet, it could do with a few more mains to increase the variety.

At the dessert bar, desserts came and went with different platters of cake or tarts each time. It ranged from caramel slices, mini orange and cream tarts (both of which were the highlight for desserts), rich chocolate mud cake, mini profiteroles, eclairs, fruit and many many more!

A piece of advice is for you to caution if you are going to sit near the kitchen door like I did because it only makes you want to get up and go for more, especially when it came to the desserts because each plate was always different. Bad for the calories though! 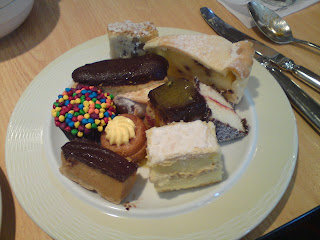 Dessert platter which had almost one of everything.
They also had a dried food section which had crackers, nuts, cheese, prawn chips, bread rolls and other cultural breads and more carbs!

The service wasn't too bad, all their staff were friendly and professional but I guess that is expected from Sheraton since after all it is a 5 star hotel. The only problem I had was with the pace of the waiters clearing out our table - we clearly were starving and ate faster than they could clean LOL.

The place looked clean and the ambiance was really relaxing yet classy meaning you can eat in peace without feeling that you have to rush by stuffing x amounts of food in your mouth every 2 seconds.

Personally, I would definitely recommend for people to go as it is money for value, given that you have the 2 for 1 special. Paying $60 or more for a lunch or dinner as I had described above is not really worth it in my opinion. If you are interested in going and the special is over, I'd say wait it out for a few months and you'll be seeing that offer back in town again.