As soon as I stepped into the doors of this little restuarant I realized that the place is bigger than it appears from the outside. I also noticed that there is a sashimi bar with a chef standing behind it at the front of the restaurant. This usually means that their sashimi would be some what fresh and would be made by a proper sashimi chef! Yumm~~


Even though the restaurant does say it is Japanese, it is actually a fusion restaurant with the other half being Korean. I have not yet had a chance to try out their korean food however it does look AND smells good!

We first ordered a smaller starter which was a small serving of fresh King fish. On their menu they had at least over 8 different types of sashimi starters however because we arrived for dinner most of their sashimi had been sold out. A disappointment it was however I guess that is the price for which you pay if you want fresh food! 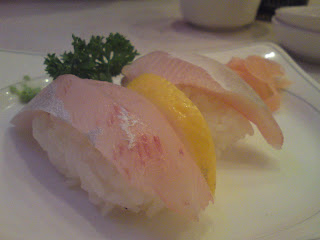 King Fish on rice - $2.50 each
Even though it was more costly if you were to compare it to a sushi train platter, it did however taste fresh so I guess it was alright. It is definitely something worth paying for if you are starving your stomach off and you can't wait too long for your mains to come out lol!

The mains came out next; we had ordered the Soba Noodles Bento Box and the Salmon Terriyaki Bento Box. 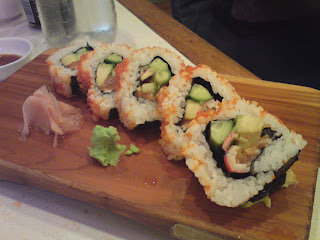 California Rolls as part of the Soba Set.

Again, you could definately taste the freshness in these rolls and all the flavours were well balanced. (unlike most sushi places) Neither the seafood stick or avacado had a dmoniating taste which is good because most places fill it up with a MASSIVE seafood stick to the point where you can not taste most of the other ingredients. 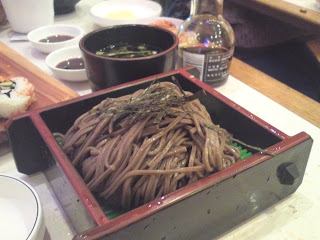 Soba Noodles with its soup base placed behind. Together the whole set was priced at $18.50 (if I recall correctly)

This was my first time trying Soba noodles so with a lack of experience in taste I can not really judge. It was sweet however it had a very strong bitter after taste which slightly turned me off those noodles and this is even though I had drowned the noodles in their soup base =/. 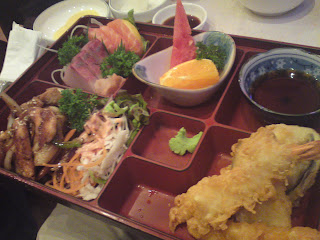 Terriyaki Salmon and Tempura Bento Box - $19.50 (If I recall correctly)

I am personally not much of a fan of Terriyaki however the Salmon here was one of the best I have ever had. The salmon was grilled to perfection, the flavours weren't too strong and the Salmon was still nice and crispy in certain areas. I guess since the flavours were slightly more mild than most average places which it is probably why I became so fond of it.

The tempura however was a slight dissapointment because it tasted quite average which I thought had therefore let down the dish a bit.

Overall, their prices are a bit more towards the expensive side because you could probably find a similar Bento Box for around $15 to $17 in the city. Given that it is Strathfield, you would expect the prices to be a bit cheaper however I guess their fresh sashimi does make up for it.

Service can be a bit slow, especially when they are busy because since the resturant is so small they would need to quickly clear out the tables for the next customer to dine. Though, I guess service is like that at most places when they are busy and Hiroba isn't a spash hot classy restaurant. It certainly isn't a bad place for those whom may wish to dine themselves too because they have so many meals which helps caters for individuals as opposed to sharing.