Strathfield is known for its Korean food, Ceci is one of those restaurants that probably helps build this reputation despite the nationality of its local residents. Even though it is small restaurant, it is still just as popular to the point where there are always a line full of people for either take away or just wanting to dine in. 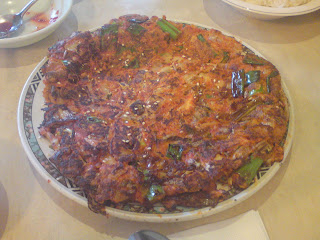 Kimchee Pancake
My favourite dish by Ceci is by far the Kimchee Pancake; not only is it cheap but it tastes so great. I admit, as much as I love my kimchee pancake, at times it can be slightly overcooked where you get a few burnt bits while other times the kimchee itself may be too sour. Most of the times though, not only are there huge servings but the pancake itself is slightly crispy on the outside and the inside is soft which goes really well with a bowl of plain rice. The flavours aren't excessively strong but are strong enough and it isn't too floury so you can actually taste all the kimchee, onion and etc. 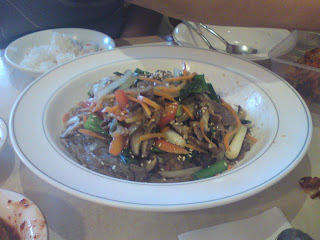 Tapche Potato Noodles
My second favourite dish would have to be their Tapche aka Potato noodles - One of the dishes that are done very well here. Again, their servings are fairly generous. The noodles can be at times a bit too oily which may spoil the dish. The noodles are to be eaten with rice to help balance the flavour of the noodles itself. 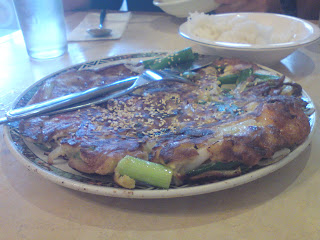 Seafood Pancake
Another pancake they serve is the Seafood Pancake though in my opinion Madang makes it a lot better. I find that the pancake may be a bit too thick, lacks taste because it tastes too floury and doesn't have enough seafood however the outside is still crispy. Servings are just as large as the kimchee pancake though which is a bonus. I also found that there were too many large chunks of Shallots (in comparison to the Kimchee Pancake) to help minimise the number of seafood meat for them to mix in. 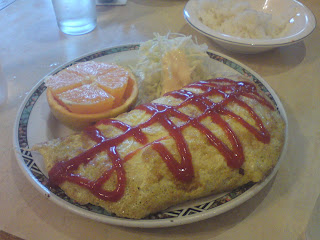 Omlet Wrap with Fried Rice
I forgot what the actualy name is however it is simply just an omplet wrap filled with fried rice. Many japanese resturants have this dish however I found that Ceci's version is a lot more tasteful, perhaps this could be a korean alternative to the japanese dish. I found that the tomato sauce was quite unnecssary but the fried rice well made really well. Full of flavour as any fried rice dish should be and the salad on the side balanced the whole dish quite well. It is also a dish which you could have on your own if you aren't sharing and should be filling enough. 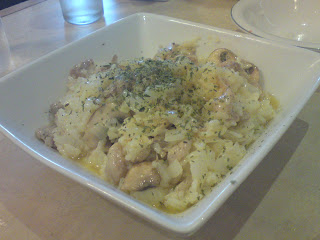 Cheesy Risotto
I never really understood why they even had this dish on their menu in the place seeing as though it is a Korean and not an Italian Restaurant. I think this is one of the dishes where people either like or dislike it. I disliked it quite a bit mainly because of the excessive cheessy and buttery taste. It is a dish where it is packed full of cheesy taste so if you love your cheese you will love their Risotto's. I clearly dont appreciate cheese enough to enjoy such a dish.

It is also a very oily dish because of both the oil and the melted butter. Last time I checked, Risotto is more of an Italian thing, I personally think it should be kept that way so if you like your proper korean food and if you aren't a fan of cheese, do yourself a favour and avoid it.

Service is fairly fast however their waitors may be hard to catch sometimes in both serving and clearing out tables. The only disadvantage is that they only accept cash and cash only. No EFTPOS facilities are available however this isn't much of an issue since there are many ATM's closely located.