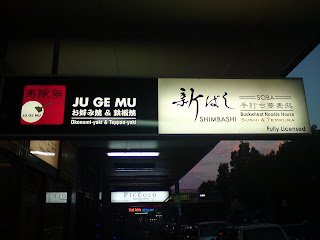 Many know that one of the places to go for authentic Japanese food is in the upper part of Sydney, Neutral Bay being one of those. Ju Ge Mu and Shimbashi are two restaurants combined together into one room, each restaurant having each of their own side. Ju Ge Mu has the teppanyaki and grill on their side while Shimbashi being in a more traditional atmosphere and surroundings specialises in soba noodles aka buckwheat noodles. Luckily, you still get the best of both worlds regardless of which side you choose to dine in! 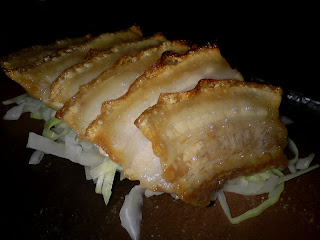 Salty Boo - $10.00
The entree, Salty Boo, was not a disappointment in terms of taste. The best way I can describe the taste is basically it is like eating Chinese pork crackling with a thin layer of both meat and fat and a touch more salt. However I was quite dissapointed in terms of its servings for $10.00 and for a entre that was on the 'Specials page' but I guess such prices are expected for a restaurant in Neutral Bay. 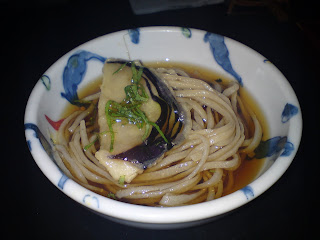 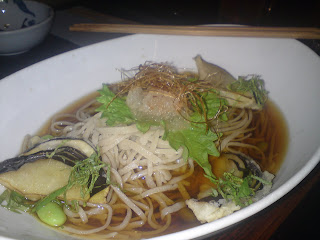 Soba Noodles served in a chilled broth with tempurar eggplant - $18.00
One of the mains was the soba noodles served in a chilled broth with tempura eggplant; The soup was well balanced where it wasn't too sweet nor was it too packed full of flavours. The soba noodles must I say, was SO good! It didn't have that bitter after taste unlike some places such as Hiroba Japanese House and they were nice and smooth and you could definitely taste the freshness as you chewed through it. 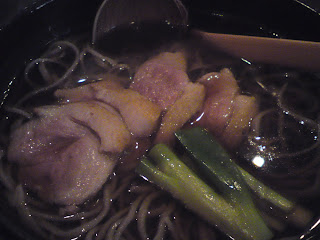 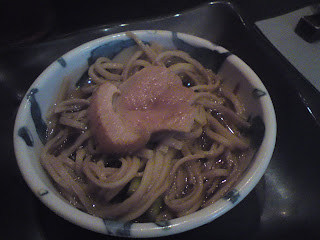 Soba Noodles (Warm) Served with Pork - $19.00
The other noodle dish was the soba noodles served with pork (unfortunately, I forgot what the actual name was lol ...). It was an automatic unaminous agreement that this wasn't as good as the initial soba dish which we had. The flavours were too strong and slightly a bit oily which over powered the texture of the noodles. 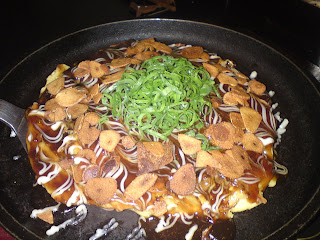 Wagayu Beef Okonomiyaki - $19.00
Even though we had to wait 40 minutes for this dish, it was oh so worth it! Once you have tried their Okonomiyakis (Japanese Pizza) you can understand why Ju Ge Mu famous are so famous for it! There wasn't too much of an eggy base nor was there too much of that sweet Japanese sauce (It tastes some what like the Japanese version of a Chinese's hoisin sauce lol) and the Wagayu beef wasn't over cooked so it was still nice and chewy yet soft. The only criticisms which I would give would be that I have prefered a tad more sauce and probably a larger serving. 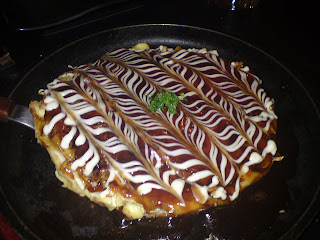 Country Mix Okonomiyaki - $18.00
This okonomiyaki was in my opinion one of the highlights of the night. There was a mix of ingredients such as more vegetables being involved and personally I also think that there was more sauce added than the last.

Even though it was an expensive meal because not only are their prices high however their servings are quite small, I would still come here again because the price you pay is for quality rather than for quantity. It is definately one of the most authentic Japanese restaurants I have been to in Sydney.

The only downside is that they could and should improve on service. There is only one receptionist filled with two waitors between the two restaurants. Yes there are another 1 or 2 people to take your order however they seem to be mainly the chef's assistances as opposed to waitors meaning they aren't that much help at the end of the day.