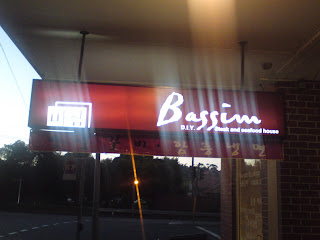 How could one ever say no to Korean barbecue, especially on a hot summer's day! I must admit I personally believe that I have a high standard for my Korean barbecue. Well its either that or I have a very biased view for Madang. In saying that, I dare say that Bassim is almost and if not equally as good as Madang and as some of my friends would know that I HEART MADANG!!!!! ♥

Being unsurprised, I find that most Korean barbecue buffet places serve mainly quantity rather than good quality food for approximately $30.00. However for those that have not yet realized, you are better off going to a non-buffet restaurant and ordering away till you are full (and potentially equally as bloated if you were to go to a buffet) and pay a similar price but for a better meal! 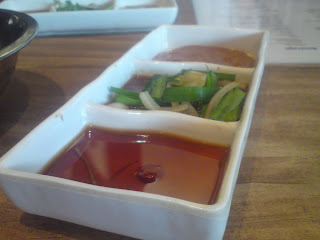 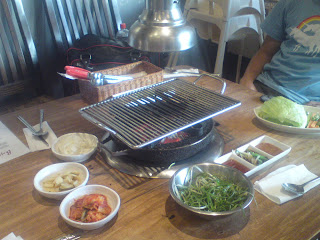 Barbecue grill with traditional Korean side dishes
As soon as I had placed the orders, the grill and side dishes came out almost immediately and the meat dishes shortly followed. Though in saying that, surprisingly the rice and water did take a while to come out. 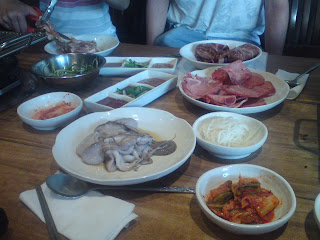 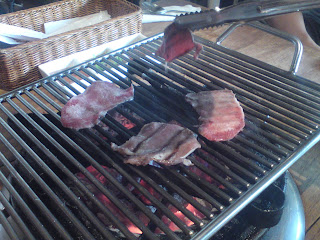 Barbecuing the Ox Tongue
The reason why I personally enjoy Bassim so much is mainly because of their marination. Their ribs, chicken and pork are marinated really well and by that I mean you can actually taste the marinated flavours as you bite through the meat even after you barbecue it! It seems like they have actually marinated it over night because the flavours seem to be exploding in your mouth for every bite you take! 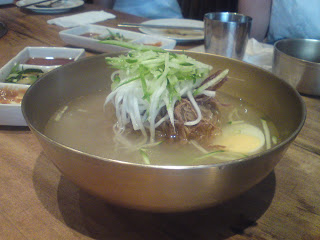 Vermicelli noodles served in a chilled broth - $12.00
Since it was a summer day, we also decided to order the cold iced noodles and must I say, Bassim from my own experience, makes THE BEST cold iced noodles ever; not even Ceci came close! The soup is chilled and just sweet enough to balance the plain flavour of the noodles and I also find that adding the traditional spicy grassy dish to the soup gives it that something extra which takes the dish to a whole new level!

Eventually when the time came to pay the bill, between 6 people and having ordered 6 dishes plus rice, it came to a measly $14.00 per person but as cheap as it was their servings were relatively smaller. I have found from experience at Bassim that being between two people it comes to about approximately $20 to $25 for one to be satisfied.

So if you are at or around Strathfield and craving Korean barbecue, take my word and give Bassim a try!