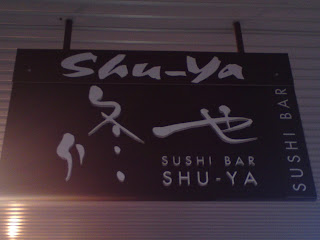 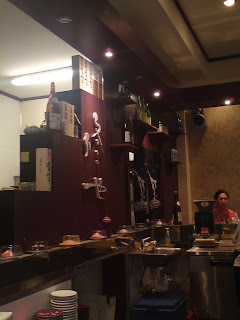 Shu-Ya Sushi Bar is a lot more popular than I thought. I had arrived at approximately 6.30 PM, the restaurant was slightly a bit empty however as I started to dine away, the place became more packed out.

The variety of sushi available on the actual train line was quite limited and many of their dishes were quite ordinary however I would assume that could order certain sushi plates out of their menu. Nevertheless I continued to eat away the night! 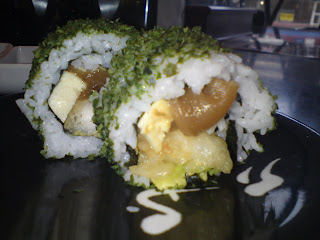 Tempura roll - $3.00
I'm not exactly too sure what the green sprinkles are but if I was to have a wild stab at it perhaps it could be ... ahh ... ok I have no idea lol *fail*. Though I believe the 'mushroom' or vegetable that tasted a bit like a mushroom was a good accompanient to have with the tempura prawn. Clearly as per my above description, you can tell that that was the first time I have both seen and tasted it lol. 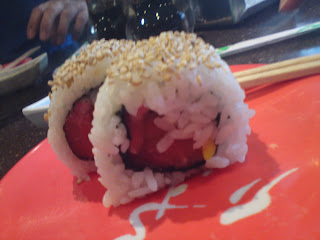 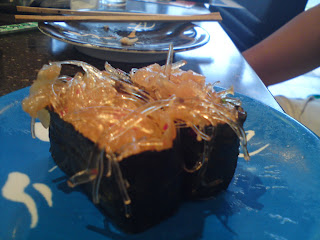 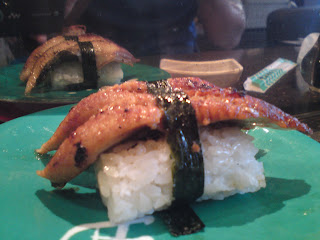 Eel and avacado roll - $3.00
I am personally not a big fan of eel and especially with terriyaki but this tasted better than I had expected. It wasn't drowned in terriyaki sauce and the eel tasted quite fresh unlike some other places where you it may be a tad dry. 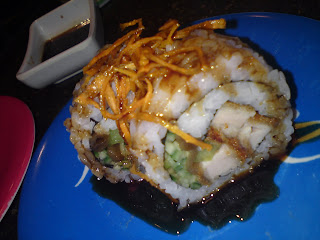 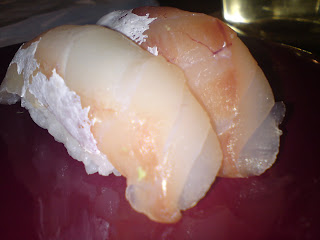 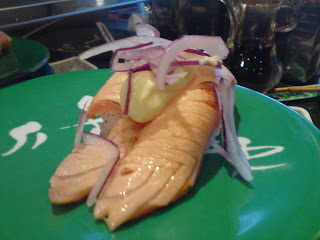 Blow-torched salmon - $3.00
This was the highlight dish from the train line mainly since it was freshly made (as in we ate it 10 seconds after it was made) =D. The salmon wasn't burnt and the blow torch made the salmon taste quite scrumptious in conjunction with the bottom half that was slightly raw. 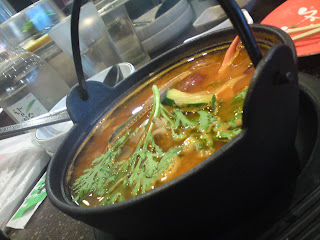 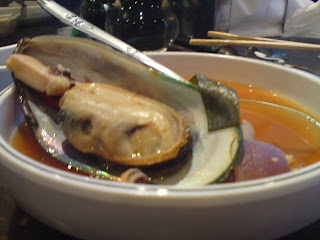 Seafood hotpot - crab, oysters, octopus, prawn, squid and assorted vegetables to be served in either a spicy or non spicy soup - $10.00
Even though it was spicy, the soup was both sweet and spicy which made it well balanced and thus reduced the actual spiciness by a touch. What was dissapointing was that they had used can prawns that were minute as however they were quite generous with their crab and oysters which I guess made up for it. This was definately the highlight dish of the night so I guess it was worth the wait =).

Service was slightly a bit disappointing - I had ordered the seafood hotpot shortly after my arrival however it didn't come out till at least 30 minutes later. I personally didn't really mind because I was still able to eat off the sushi train but the waiter didn't even ask if I wanted spicy or non-spicy and by the time I had asked if it was non-spicy it was already too late. I guess partially it was my fault however it would have been nicer if they did ask me =/.