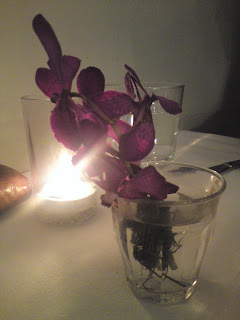 This is the first time I have actually dined at Five Dock and to my surprise it is actually quite a classy area. Qui Restaurante Cafe screamed out 'North Sydney' to me - even though it wasn't really that popular, the place had a really nice home-like atmosphere and service was almost second to none! The seating area was just below the kitchen so you could actually kind of seem the chefs creating their dishes! 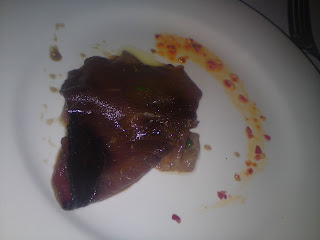 Tuna Carpaccio with chilli - $17.50
Shortly after we ordered, the entree' came out within minutes but it may because of the dish we had ordered. The tuna itself tastes a lot more appealing than the picture looks and please also note that the serving on the plate in that picture is only about one third of the actual entree! The salmon wasn't amazingly fresh but it was fresh enough and it wasn't too salty.

I am not chilly fan but I must say it definately tastes a lot better with a bit (and I mean a bit) of the chilly. The price was a bit expensive for an entree but I guess it is what you expect to pay at such a cafe, especially when it involves seafood. 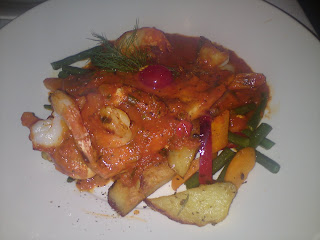 Pollo Gamerbi - $25.00
A while later came out the Pollo Gamerbi which really is chicken breast and prawns accompanied with a balangense sauce and vegetables. The potatoes were roasted to perfect!!! and the juicy prawns went well with the chicken. If I could comment on anything it would have to be the sauce - personally I think they may have overloaded it with a bit too much sauce. 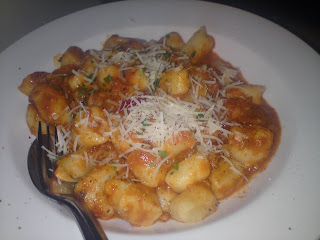 Gnocchi Bolognese - $20.00
Next came out the Gnocchi Bolognese - it was the first time I had Gnocchi so I really couldn't compare with others. Again they had too much bolognese sauce and the sauce itself was a bit too cheesy for me. The servings for both mains however were quite massive and towards the end of the meal, we were struggling to finish!! 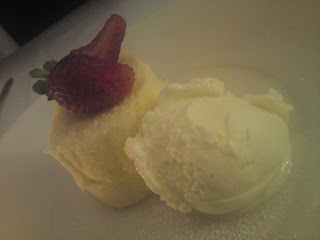 Lemoncello cake roll - $8.00
This was actually quite cheap because again, the serving was quite satisfactory. The gelato went well with the sponge cake and its filling however the cake was a little bit dry. If i was to return, I would definately come back to try their Creme Brulee - IT LOOKED SO GOOD!!!