At an award winning restaurant you would think that it is bound to be good, I can tell you right now it sure was - It was the BOMB! The restaurant wasn't as packed out as it was when we arrived (which was around 7:30) but by around 8 ish it was so packed!
There were only a few selections to choose from; either from a $42 course which included 4 small entrees and a main or just a main for $30. We of course went first option and shortly after we had ordered, the entrees came flooding right out. 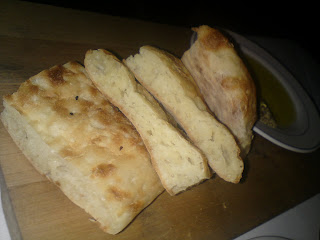 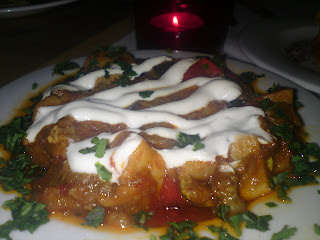 Sun dried tomatoes, eggplant, potato mash covered with a Turkish Yogurt. (I have no idea what the exact name was but I guess they were the main ingredients)
To me, this dish was fairly average as it wasn't anything out of the ordinary however it did go really well w/ the complementary Turkish. Surprisingly, the yogurt was quite subtle and helped balanced out the flavours of all the other ingredients, especially the tomato and eggplant. Ricotta and Feta cheese balls accompanied with sun dried tomatoes drizzled with olive oil.
THE ONLY reason why I ordered this dish was because I thought it was like the cheese bread balls from Braza. Clearly not. It was really just a ball stuffed with cheese . . as some of my reasons may know I HATE cheese with a passion. Nevertheless though, I did have a try and the cheesy taste wasn't that strong however my hatred for cheese took over. If though, you are a cheese lover like my parnter, you will certainly enjoy this dish. 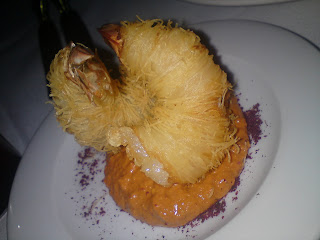 Shredded pastry rolled King prawns on walnut and capsicum dip.
This was like food in heaven . . . it was so amazing. The king was large and juicy and the shredded pastry added an extra level of crunchiness to the prawns. I could have like 10 of those, it was that good. The walnut and capsicum dip in terms of taste was qwuite subtle which was good because it did not dominate the sweetness of those prawns. 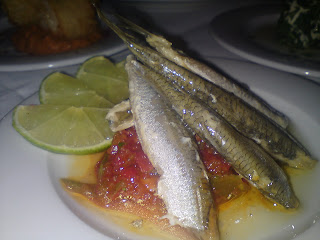 Panfried black sea sardines on tomato Ezme
This sardine dish was the most interesting of all, the sardines were of course boneless and the tomato ezme (which is really more like smashed up tomatoes with asparagus and olive oil) went really well together. The sardines was also still a tad crunchy whic went well with the softness of the tomatoes. 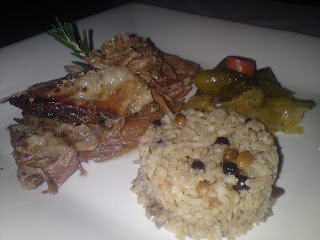 Chargrilled lamb with rice and pickled salad
The lamb was a tad salty however this was balanced with the rice. The rice wasn't your normal asian rice, rather they had added in some other flavours followed with some beans and nuts (I think they were beans or nuts lol). It looked quite small at first however when when you share this and another main - it was definately quite fillling. The pickled salad however was wayyyy too sour and salty for my own liking though. 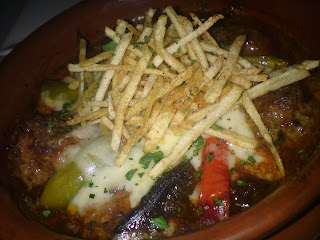 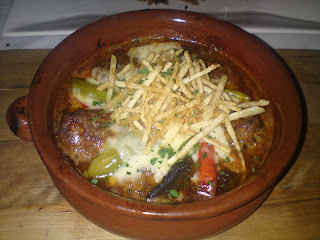 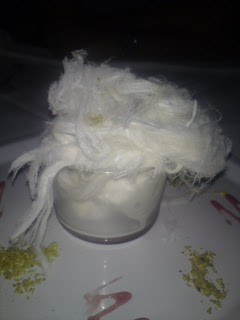 Marash Ice cream served with turkish fairy floss and pistachio - $12.00
As full as I was, I could not resist dessert and I am so grateful that we did go ahead with their dessert. All I can say is that it was SOOOOOOOOOOOO AWESOME!!! It was definately the highlight of the night!! For those who are not sure what Marash ice cream is, it is a creamy, smooth Turkish Ice cream with an elastic texture. Their fairy floss was also a bit chewy but the sweetness of the fair floss went so well with the ice cream. It was just amazing!! I would definately come back here just for their dessert - that is how awesome it was!!

Service was also quite good because the waitor explained to you what each of the dishes were and was also quite attentive. I would say that the place isn't cheap but you are definately paying for the quality of their food. For those whom have an entertainment card, it is definately just an extra bonus!! I would definately come here again and recommend that to those who haven't tried it, please do yourself a favour to try it out; the food is quite amazing and interesting.
Efendy Modern Turkish Restaurant
- 79 Elliott Street (Corner of Darling Street), Balmain NSW 2041