'The best fish and chips in the universe' is what they claim themselves to be and to many customers out there, that is what it is! Having won many awards in Excellence for Seafood for 15 years in a row, is bound to be a place worth trying. 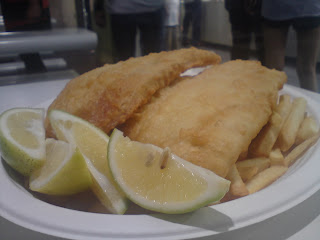 Fish and chips - $10.50
In the end we decided to for the basic fish and chips since it was our first time there. The fish wasn't covered in too much batter and there was definitely more fish than batter, or at least a good balance of both. It was like some crap places that served a tiny sized fish covered in mountains loads of batter. The chips were a slight disappointment; quite average really and they drowned in way to much salt which caused a bit of damage to my taste buds. 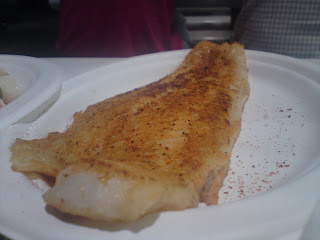 Grilled fish of the day - $9.95 (approximated price)
We had also ordered a grilled fish of the day; all I can is that you could definitely taste the freshness within that fish however again, it was a tad too salty for my liking. In my opinion, the over powering flavours spoiled the fish because it the saltiness that dominated the whole fish which was again slightly disappointing. 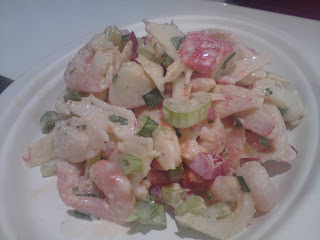 Seafood Salad - $5.95 (Approximated costs)
When I first saw the seafood salad I wasn't too sure of what to expect; It wasn't very different to any other seafood salad but at the time certain ingredients such as the celery and shallots made it slightly unique. The flavours of the dressing and seafood wasn't too strong which was good nor was it salty for a change. 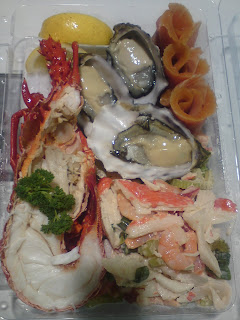 Cold seafood platter - $30.00 (i think)
This was slightly average, mainly because the Hero of the platter being the lobster, wasn't that sweet and hence being a disappointment. The oysters though were just perfect where the meat was silky smooth! 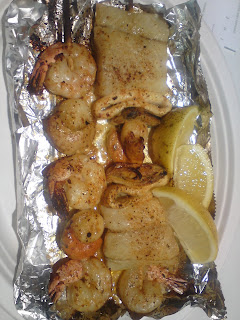 Marinated seafood sticks - $5 -$8 each, approx.
To be honest, I thought that these were a bit expensive but I guess that is seafood for you. Their marinated grill prawns were just de-lish! The sweetness came pouring out as you bit your way through the meat.

Service was good because despite the long queues, the food still came out relatively fast. The only downside however was that they loved to rip their customers off with little things such as their sauces. One small cup of tartare sauce costed almost $5.00 which I personally thought was an insane rip however I guess their awesome seafood makes up for it.

Email ThisBlogThis!Share to TwitterShare to FacebookShare to Pinterest
Labels: Drummoyne, Fish and Chips