Over the years, I have always heard DIY Korean BBQ, DIY Hot Pot, DIY Vietnamese Spring Rolls and so forth but it is only recently till I was introduced to the new concept of DIY Frozen Yoghurt. 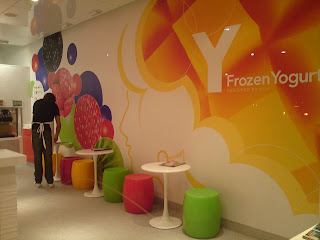 Y Frozen Yogurt is hard to miss if you are walking to Glebe Point Road to or from Broadway as it is located towards the start of the road. The place looks quite bright from afar as all you see is this beaming white light! 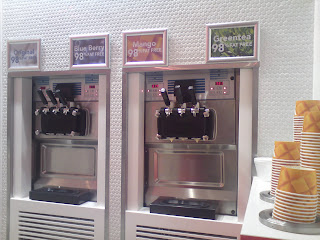 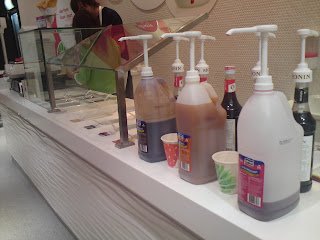 The whole DIY concept is purely based on weight. You pour in as much yoghurt you want into your cup, you sprinkle on as much toppings and fruit as you want. For approximately half of their bowls of yoghurt, it would be around $3.30. Their frozen yoghurt is fat free and doesn't contain any preservatives and etc. I can't remember though it if it was made from real fruit. 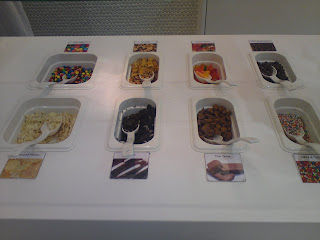 D.I.Y. Mix in's
There are different types of toppings available including the old time favourite, gummy bears!! Though in saying that, there aren't as many varieties available like Cold Rock where the range of mix in's seems almost unlimited. 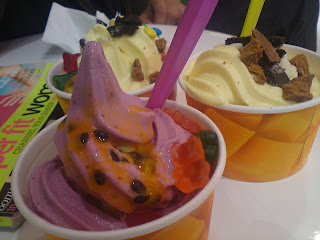 Frozen yogurt with assorted toppings - $6 to $9 (give or take a bit)
The mango and green tea were probably my two favourites. The yogurt was so smooth and the flavour of the green tea was so strong which made it so vibrant! The problem associated when desserts are charged based on weight is that people tend to go overboard and as a result, the price of the cup of yoghurt increases.

As I said before, for half of a cup of yoghurt, it would cost approximately $3.30 however if you add a bit more yoghurt with a couple of toppings, the prices start to build up. It may seem quite expensive for just a cup of frozen yogurt however you have to remember that you are paying for the quality of the yoghurt, being fat free and no added preservatives and so forth.