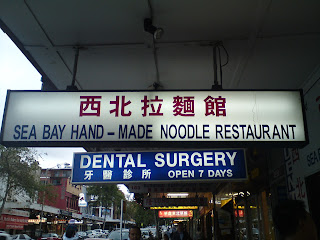 I used to love Sea Bay as the flavour used to be so well balanced except the last visit I went, I found that their food was so overly salty for some particular dishes or the flavours in some of the soup dishes were not that well balanced.
The Hot and Sour soup was barely hot and sour. It tasted more like beef, tofu and tomato soup to me. Even though the hand made noodles itself tasted great, the soup just didn't do it for me which is what made the dish itself a disappointment.
These dry noodles were just WAY too salty for my own liking. It tasted like as if I was eating just plain noodles with minced pork with a massive stash of salt. As the noodles got less, it soaked up more sauce which multiplied its saltiness.
The siew long bao was no where near as good as the ones at Ashfield. The skin was way too thick (it tasted as if you were eating a BBQ pork bun) and the inside didn't have enough juice! The only good thing about it was that it was definately value for money as it came with two steamers being a total of 10 massive dumplings for only $8 or so! What a bargain!
Overall, the dishes were a slight dissapointment because the flavours of the food were not as good as they used to be. Based on that last recent experience, I do not think that I will be going back again for a while which is a real dissapointment since it was one of my favourite restaurants!
Sea Bay Hand-Made Noodle Restaurant
- 181 Burwood Road, Burwood NSW 2134
Gotta go eat!!
Posted by Hungry Much at 2:25 PM

Email ThisBlogThis!Share to TwitterShare to FacebookShare to Pinterest
Labels: Burwood, Hand made noodles