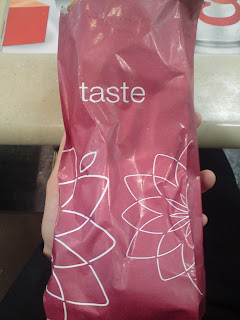 If you have an obsession with Baguettes and you haven't tried Taste Baguette, then you are seriously missing out! Taste Baguette tries to combine both French and Vietanamese ideas of food together. They sell some misc. French desserts but the main focus for today is their baguette's!


They have different types of Baguettes and all decently priced. In my opinion, it tastes like a smaller version of Little Vienna but just in a Baguette. It isn't as filling as the massive hard crust sandwiches from Lilttle Vienna but I think it tastes a bit better, mainly because it is served in a Baguette =P.
The grilled chicken wasn't overly grilled which is good thing because I am sure everyone doesn't want to be eating a black char grilled chicken that produces cancer! *Touch Wood of course*. The baguette was definately fresh because it was so light yet crunchy at the same time and there was just enough salad to help balance out the meat. Would definatetly come back for some more bagette munching at lunch!
They also have these franchises in a few locations around Sydney CBD.
Taste Baguette
- 68 Market Street, Sydney NSW 2001
Gotta go eat!!
Posted by Hungry Much at 2:43 PM