It is renowned for being the Best Thai Restaurant in Sydney for the past 4 years - I think that itself was a good enough excuse for me to try it out. 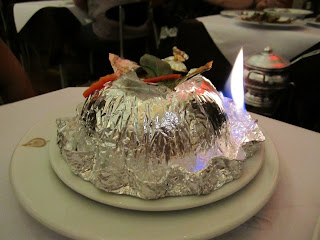 As soon I walked in, all I could see were tables filled with people everywhere. The atmosphere was so lively, it was no doubt a popular place so I was quite glad a reservation had been made.


The service was almost immaculate; the waiters were quite efficient. They would serve the rice onto your plate as opposed to leaving a massive tub of rice next to your table for you fill up yourself. They even would come around from time to time to make sure you have a clean napkin at all times. The food itself came out within minutes after ordering and mind you, this was during the busy nights of the night as well!
The flavors in this dish were all there. I wouldn't say that it was the best curry I have had in my life but it was still good. There wasn't too much coconut and it was sweet yet spicy. The only disappointing thing was that the serving was quite small, especially given its price. The sauce was just right though, I could of drowned my entire plate of rice in that sauce. It wasn't too runny but at the same time it wasn't too thick.
The combination of sweet, sour and hot made really it interesting especially the balance of both the sweet and sour where neither of the two flavours were overpowering. Even though the fish was fried, it wasn't very oily yet the fish was still crispy.
This was quite an interesting dish; I would say the best possible way to describe it was it was like having a bowl of assorted seafood tipped into a pile of curry while it is grilled within the foil. In saying that, it was quite nice because the flavours of the seafood and curry was all mixed in so you had this strange, yet thai like flavour. As small as it looks, it was actually one of the more filling dishes of the night!
The salad was quite small, given it's price. This was surprisingly more spicy than I expected but other than that, there was nothing really that interesting about this dish. It tasted like every other thai chicken salad I have had.


This dish was suppose to be extra spicy but even someone like me with a medium chilli tolerance did not find it that chilly. Surprisingly, the chicken thai salad was more spicy than this. To be honest, I was quite dissapointed with this dish as it tasted more like a chinese tofu stir fry with a bit of chilly more.  I was expecting something more!!


Overall, Thai Pothong is no doubt quite popular however I thought it was overrated. Yes, it did have nice food but the prices were a little bit pricy for what I thought it was actually worth, mainly because it's servings could have been a bit bigger. For being the Sydney Thai Restaurant for the past four years I would of thought they had more interesting dishes or dishes with more flavour such as the Flambe and the fish. Places like Cha Thai or Thai Eatery in my opinion, had better food but Thai Pothong definately had a better atmosphere.
Thai Pothong
- 294 King Street, Newtown NSW 2042