This modern Italian restaurant is opened up by the Head Chef of Little Italy so I guess that could explain why it was so packed out for it's location. The only booking I could get was for 8 pm and even when I arrived (and left) the restaurant was still pretty much packed out. 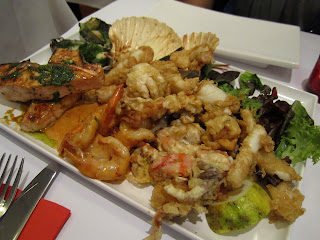 I wasn't too sure of what to expect was this as the first time I was dining with a Scoopon Voucher. The seafood platter for two is normally valued at $115 however on scoopon it was going for $49 so I wasn't sure if they were going to modify the contents of the platter.
Nevertheless, not long after we were seated the Entree's had came out and at that stage I was slightly bummed that we were sitting outside as I was struggling to take decent photos in the dark! So I apologise for the first few poor photos. 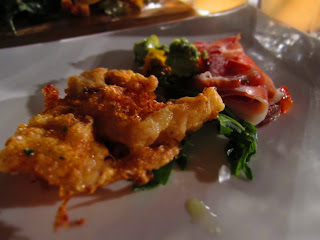 The softshell crab done so well; it wasn't too oily - it was crispy and the meat soft and tender. The eggplant and sun dried tomatoes were so well grilled and the accompaniant of the garlic made made it just right. Evertything on that board was just perfect - nothing was over cooked nor over seasoned.
After our entree's, we waited almost 30 minutes for our mains to come out but it was all good as their staff were well aware of us and gave us on going updates of when it would come out. To be honest, I was slightly dissapointed with the platter as it was QUITE different to the pictures that were on the Scoopon Voucher. That aside however, when the food did finally come out, it was nonetheless still a platter with a lot of seafood.


The calamari and crab were quite average to what you could find at most other restaurants. The only good thing about it was that it wasn't exessively oily nor was it overly crummbed/battered. The scallop was a bit of a left down because it was quite dry and not at all juicy. The oysters covered in Pesto was so good!! The pesto went so well with the jucies from the oysters. The prawns that were covered in their sauce was quite nice because they had sliced down the middle of the prawn which allowed all the flavours of the sauce to be sucked in.
I have purposely saved the Salmon to last. All I can say is that that piece of salmon was the bomb!!! It was grilled to perrrrfection! The skin was nice and crispy, the meat itself was well cooked on the outside but it was still semi raw in the middle which made the whole piece of salmon was perfect. The fact that it was semi cooked made the meat so soft and juicy so when you bite into it, it was so tenderous! It was no doubt the highlight of the night. That piece of salmon made the wait so worth it.
Overall, I was quite happy with their food. I have to say some of their food was quite average while others were just amazing so it was a bit of a hit and miss. If I were to come back again, I would definately have to order their salmon - that is how good it was. The restaurant has a very lively atmosphere which is always an extra bonus and their service was also fairly decent. Initially we were seated outside and I had asked if they had any indoor seating but it was all fully booked out. Shortly after our mains, we were then advised that there was a table inside and had offered it to us.