I am going to admit . . . this was the first time I have ever been to an Indian restaurant so I wasn't exactly too sure of what to expect. I love Neutral bay for its food and all though I must say however as a side note, parking was almost impossible to find! 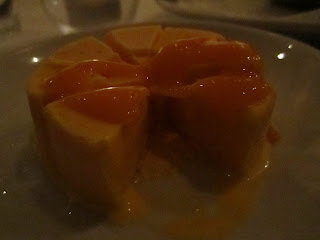 That a side though, as soon as we entered into the restaurant, we were greeted with really good customer service especially since they were all really polite. The food took a while to come out however the waitors were well aware and gave us regular updates every 5 or 10 minutes.
We had ordered the 'fresh banquet', mainly because it had the word 'spicy crab' in the menu. The reason why I had came to this restaurant in particular was that we had a scoopon voucher which I had previously purchased. The restaurant was doing an 8 course special where it was only $30 for two instead of $90!
I personally didn't like their salad, there was an acquire taste in the sauce which to me wasn't that tasty. For others though, they  had found the salad to be quite average. One thing which was I was slightly disappointed about was that all the main courses were piled up onto a plate. I would of preferred if they had presented each course on a separate plate as it would of appeared for the course to be more than what it actually was.
Their curry was of course, one of the better dishes which is good to say since the Indians are known for their curries! The spicy crab however was quite a disappointment because it wasn't spicy and the serving was quite small. I am not sure if this is because we had the scoopon voucher as opposed to paying normal price.
Their desserts however  . . . were the highlights of the night!!!! The warm pudding was really sweet but for some reason it was so well balanced because of the fact that the pudding was warm. I would even say that since it was warm, it reduced the actual sweetness of the pudding.
The mango ice cream was very different, it wasn't too soft nor too hard but at the same time it just felted into your mouth and the flavour of the ice cream tasted with full of mango and its natural sweetness. It was indeed a winner of a dish!
Overall, it was not a bad restaurant. I am personally not too sure if i would come back the for their main courses but I would definitely come back for either their service or their desserts. In saying that though, if the scoopon voucher came around again, I would definately consider buying it for teh second time though in all honestly, i would probably not pay $90 for the meal between two.
Mumbai Nights
- 136 Military Road, Neutral Bay
Gotta go eat!!
Posted by Hungry Much at 9:48 PM