Masuya Seafood and Makoto sushi train are two of my favourite restaurants because I think it is quite hard to go wrong with these two choices. The only thing is that the food is pricey compared to most other Japanese restaurants. In saying that, you do get what you pay for - better quality dishes, fresh sashimi and fresh ingredients! 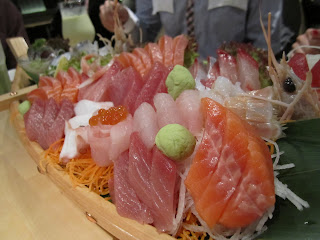 Part of what you pay for is for their service. The waiters are quite attentive, your drink orders as well as your food come out relatively fast. For example, we had ordered both sashimi boats as well as several hot pots. The waiters will always ask you at what interval you would like the hot pot n etc rather than just smacking a large pot in the middle of your table.

The rolls did take a while to come out though that is because their roll's are made fresh on the spot. My personal favourite would of defiantely been the spider roll. All the other two rolls were still nice but the soft shell crab was the stand out! The crab was crispy and the fact that the crab was still warm elevated the dish to an extra level!
For all the sashimi lovers out there, I definitely recommending this boat between two! Yes it does seem a little big for two but you can never! have enough sashimi in my opinion! Their seafood are always fresh and even non-oyster lovers will also like their oysters as proven by a friend of mine! There are range of sashimi served on this boat starting from salmon, tuna, king fish, caviar, clam, oysters, squid and more!

Their hotpots can be shared between two to three people and for those who do not like that much seafood, there is also a wagyu hot pot and several others! Their hotpots are not your average chinese styled hot pot where you put in things as you go. All the seafood are also placed in the bowl, all you need to do is to pour in their 'milk'. Feel free to correct me if i am wrong, but I believe that the liquid you pour in is a special kind of japanese milk. Sounds strange but once it absorbed up all the seafood flavours, and added in some extra herbs, it actually tasted quite nice. The sweetness from the milk made it all that different!
So for those who who have not yet been and are a big fan of Japanese food then I would definately recommend for you to try out this restaurant if you have some spare cash. I would admit that the restaurant is not cheap but it is definately worth the money you pay!
Side note: bookings can only be made for the two intervals: 6-8 pm or 8-10 pm.
Masuya Seafood Restaurant
- Lower level, 12-14 O’Connell Street Sydney NSW 2000
Gotta go eat!!
Posted by Hungry Much at 8:47 AM