Along Glebe Point road is a very tiny Polish restaurant tucked away at the end of road. As small as it is however, the restaurant was completely packed out and even though we had made a booking, we still had to wait an extra 20 minutes! It was just that busy! 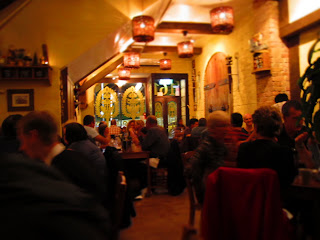 The entree's came out shortly after we had placed our orders. The food was a bit pricey in the sense that it wasn't really that value for money however I would definitely say that the food was very hearty!


The soup was more of tangy than sour due to the smoked sausages. The meat platter was quite ordinary and in my opinion, it definitely wasn't really worth spending $15 for a platter of ham. The dumplings were fairly good being either fried or boiled. The skin of the fried dumplings tasted like the shanghainese pan fried dumplings and the boiled dumplings tasted like a gigantic tortellini. I thought that the cheese and the sour cream would be quite strong but surprisingly was quite well balanced.


The mains were fairly decent as well even though it did take a while for it to come out. The schnitzel , Bigos, skewer of meat were average meaning it wasn't that hearty or special. Some of the meats on the skewer was quite hard and difficult to chew.
The potato pancakes however were so crispy and cooked to perfect - it wasn't too crispy to the point it would burn but still crispy enough. I regret not ordering seconds of those pancakes! The fish was  so full of flavour and the duck was really tender. The flavours from the stuffing within the duck came through and into the meat and the skin was soft and juicy! They definately had some great dishes on their menu.
An extra bonus for those who have a copy of the entertainment card as you are able to get 25% off your bill to a maximum of $30! So for those who have not yet been, I would suggest for you to go and order both the boiled dumplings and those potato pancakes!
Na Zdrowie
- 161 Glebe Point Road, Glebe
Gotta go eat!!
Posted by Hungry Much at 12:19 PM