This has probably got to be one of my favourite Spanish restaurants because it feels like one block of Spain has been imported right in the middle of Sydney!  One valuable piece of advice I would give is that if you want you to dine at this restaurant, I would strongly suggest for you to book in advance. This place, just like most other Spanish restaurants, gets booked out fast! 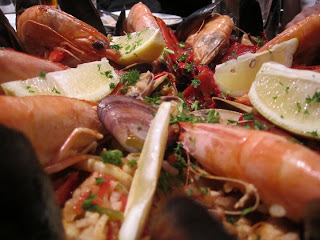 Shortly after we ordered, the food came out within reasonable time, taking into consideration the fact that it was peak dinner period. The paella however, did take a while to come out but I guess that is expected with a fresh paella.
Must I say, the Spanish love their potato and they know how to make it best. Garlic potatoes are my favourite, this dish was equally just as good! The mayo and the salt on the potato with the salsa was the perfect combination and the mayo especially tied all those flavours together!
All their tapas in general were fairly tasty in each of their own ways. The deep fried cheese balls was not really that cheesy which for me, was a good thing. The sausages were also nice however it wasn't anything special or different to most other restaurants. The highlight in the prawns dish was the garlic and chilli in the oil. Perhaps I am slightly biased because I love garlic but that garlic went with everything. I even poured it onto those char grilled sausages! It was THAT good!
The pizza was fairly average in my opinion: it was still good pizza but it wasn't anything that special. When the paella came, needless to say, everyone whipped out their phones and cameras and started flashing and uploading away onto facebook. For four, it might seem small but believe me, it is more filling than you think it is. There were 7 of us, and there was still some rice left over. Even though the base was a still soggy, must I say that they were very generous with their seafood.
An extra bonus for those with the entertainment book as there is a 25% off voucher in the book. Between 7 people we ended up paying only $21 or so per person including drinks! Was definitely in need a good night for both our stomachs and wallets.
Encasa Restaurant
- 423 Pitt Street, Sydney NSW 2000
Gotta go eat!!
Posted by Hungry Much at 10:03 AM