This is one of the rare few restaurants which I would go back because its food and in particular, it's service was that good. One the things I like about Blancmange is that it is tucked away in its own corner and away from almost everything else. 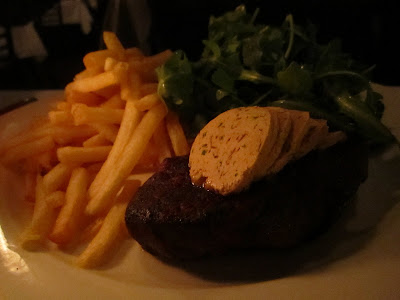 The restaurant itself is quite small and the atmosphere was cosy, part of it's layout and service reminded me of my visit to Assiette. This might be strange to say but because it was raining, it made the restaurant so much more cosier.

The oysters were fresh and like any good oyster, it felt like it melted smoothly in your mouth. I personally preferred the Pacific oysters more because it was meatier due to it's size. The vinaigrette was subtle however it was enough to add it to a nice tangy flavour with the lemon.
The entree's were more filling than they looked. Unfortunately, I can not recall the exact ingredients from their menu which is a shame because both entree's were really well made. The deep fried strips of pork were really interesting; it was crunchy and crispy on the outside however the meat on the inside wasn't over cooked because it was still tender.
The soup didn't taste as creamy as I thought it would be which is a good thing in my opinion. The deep fried potato stuffed with selected vegetables created some texture throughout the soup and helped balance the creaminess of the soup itself.
The mains did take a while to come out but at least you know it was definitely made fresh and well. The best way to describe their mains (and their dishes in general) is that their food were very warm and hearty.
The salmon was well cooked because the skin was nice and crunchy but the salmon itself wasn't over cooked. The soup at the bottom was light and you didn't have to add any more salt because the saltiness came from the juices of the ham itself.
Even though the Angus steak was small, it was tender and I liked it how there was barely any chunks of fat in it. The shoe string chips were extra crunchy (extra brownie points there) and the salad had a subtle dressing which accompanied the steak well.
For some of my reader, you may know that I do not have much of a sweet tooth so rich desserts are evidently not my favourite. The dessert this time around was pleasantly rich because the bitterness of the chocolate balanced out the richness. When you take a small bit of everything and try all of the components of the dish in one go, all the ingredients just magically blend together. The dessert was one of the highlights of the night.
An extra bonus for the Sydney entertainment card holders as you get 25% off the total bill to a maximum of $35 per card. The restaurant definitely has one of the best customer service (and especially because it is so personalised). So for those who have not been, I would definitely recommend this restaurant to everyone.
Blancmange
- 1 Station Street (opposite Petersham Park), Petersham
Gotta go eat!!
Posted by Hungry Much at 11:28 AM