So we all know by now that there are two important things in my life; Italian food and potato. It is what I constantly crave and what I simply cannot live without. Most people say their patronus is either cake or chocolate, well mine is the power of the two combined. 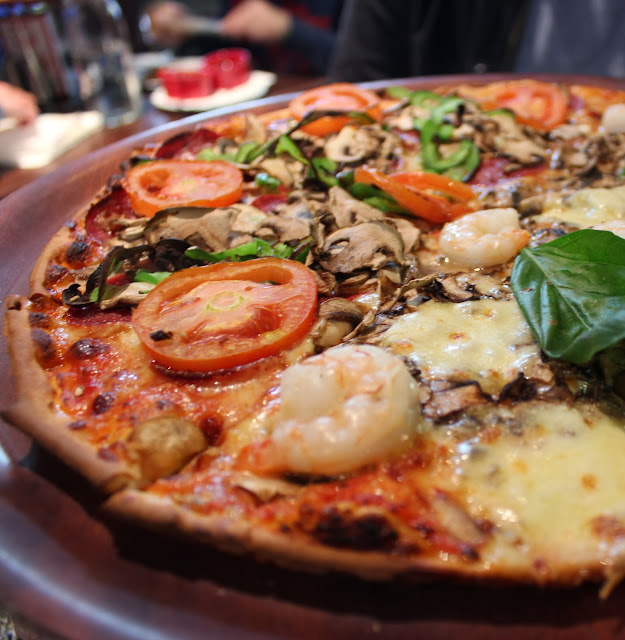 I have Italian at least once a month but sometimes my cravings are so bad and impossible to control so I end up having Italian once a week for several weeks in a row. I never get sick of it and I really hope I become an Italian in my next life.

Earlier this year I posted Round I of Italian date nights and after reading all your responses, I thought it was time for Round II.

First up is Table 24 in Summer Hill. This is definitely one of my favourite Italian restaurants hands down. There is a little man behind the counter roll away his dough and preparing pizzas all night long.  It is seriously so cute to watch when you are sitting down because all you can see is his head bobbing up and down. Quite entertaining in my opinion.

The pizzas are freshly made and mounted with generous amounts of toppings. Their pizzas are approximately $17 to $20 but it is equivalent to a main and a half. They are that huge and extremely filling. The dough is a bit thick so for thick base lovers out there, this might be your pizza.

Their pastas aren't hand made but it is cooked to el dente so there is still a slight bite to it. Can't complain when it is only $15.

I like Table 24 because it seems to one of the local's favourites. You can also tell the little man puts a lot of love into his pizzas. Towards the end of the night, the little man would walk around the restaurant and if he sees any left overs, he would personally cut it up into smaller bite size pieces hoping you would finish it off instead of wasting it. Now that's passion.

Another favourite of mine is Arthur's Pizza. Every time I am in Randwick, I would make a mandatory visit to Arthur's Pizza. The first restaurant opened up in Paddington and eventually they opened up in Bondi Junction and Randwick. Arthur's Pizza have been around for 30 or so years so they are obviously doing something right to keep their business going.

Yes, I ordered a family size even though it was just DC and I. Judge all you want for all I care but that was some dam good pizza and it was so worth packing on all those carbs. The dough is quite thin but again not as thin as the ones from Via Napoli and average waiting time is approximately 20 to 30 minutes depending how busy the restaurant is at that time. It is definitely worth the wait though. Their pizzas are so flavoursome and it will satisfy all your pizza cravings that you have been longing for.

The homemade Tiramisu very popular so if you do want to try one, I recommend for you to ask your waitress or waiter to save you one as they sell out pretty quickly. The coffee taste isn't that strong but it is a light dessert so you can easily fit it in after your family sized pizza.

Right across the road from Table 24 is Da Vinci's. Another local favourite. Each time I go past Summer Hill, I noticed that there is always a crowd outside Da Vinci which is what made me so curious to check it out.

When I saw on the menu that the garlic prawns were only 10 bucks, I had no choice but to order it. The sauce in that dish was addictive but unfortunately it only came with two small pieces of bread. DC and I couldn't let such a good sauce to go to waste so we ended up ordering some extra garlic bread to soak up every single last drop of it. No good food or any food really, ever goes to waste when I am there.

The wood fired pizza was freshly made but I wished there were more toppings on it to give it more flavour. The spatchcock isn't on the regular menu as it is part of the Christmas special so you peeps, there are still a few weeks left for you to order it if you ever check out Da Vinci's. The marinade made the spatchcock really tasty and the meat was juicy and tender. I regret sharing this dish...

Dessert was on the house with thanks to the owner. He was really proud of his gelato/sorbet as it was homemade and dam.. he had every right to be. DC ordered a scoop of the coffee flavour gelato and he said it was one of the best he has ever had. There was such a strong coffee flavour. It was like as if the coffee was filtered through many many times before it was mixed in. A visit to Da Vinci's isn't complete without a scoop of their gelato/sorbet.


La Casa was one of the restaurants recommended by a couple of the readers that read the first round of my Italian date nights so I was pretty excited to check it out. I must say that out of all the restaurants I have tried, this was one of the few restaurants that actually felt like I was dining in a family or friend's home. Service was almost perfect and the waiters would come around to every table and have a friendly chit chat with you throughout the night.

Both dishes were just as hearty as each other but I preferred the seafood spaghetti. There was a generous amount of seafood in that dish and the flavour was just right. Not too buttery, not too salty and not too plain. If I recall correctly, I am pretty sure DC and I ate this dish in silence because it was that good.

The calzone was also stuffed with lots of meat and it is actually a lot more filling than it appears. I would of liked it if they had more sauce served with the calzone but the juicy meatballs made up for it. Can't wait to come to check out more of their pizzas and for another round of their seafood spaghetti.

So that's a wrap peeps! I hope you enjoyed my rounds of Italian date nights as much as I have enjoyed my experiences and would love if you could let me know of more 'must-try' Italian restaurants anywhere in Sydney.